Over the years, the term moral education has been defined in various ways by numerous scholars. There is no particular definition for the term.

However, to understand it in simple and plain language we can say that moral education is the teaching of values that distinguish between right and wrong. It is this set of values that finally guides your behaviour and intentions towards others around you.

For centuries, academicians and intellects have debated the world over whether moral values should be taught in schools or not. Many believe that moral and ethical values cannot be taught but can only be learned through the actions of peers and elders.

In this case, the foremost question that may arise is how do we distinguish the right action from a wrong one if we are not taught the same. One act may be considered right for a particular person and wrong to another.

Therefore, it becomes necessary to universally consolidate a certain set of values and morals to enable community living. Moral values in education are as important as a Doctor of Philosophy.

The objectives of moral education can be summarized as below.

With the rapid development of the internet and technology over the past few years, the world has become a global village.

With distances being shortened, high-speed communication, and closer interactions between different groups, the world has become a single community linked together by telecommunications.

This fast-paced world has brought about the need for the introduction of ethics, values, and morals to promote community living. Moral education has never been felt more required than today.

Surveys reveal that the early 1980s saw a drastic decline in students’ academic performance and behavioural patterns. It was then that educators reintroduced the term “character” in their tutoring sessions.

Character can be defined as the moral qualities that are distinct to an individual. Educators emphasized on introducing students to good character and eliminating bad habits.

Educators then believed that an early introduction to good habits or ethical values was conducive to building harmony in society. Therefore, it can be clearly seen why moral education is essential.

The term moral and ethics is more often interchangeably used though in practice the two words have entirely different connotations.

Not only the life of one’s self but the life of everyone around. Every moral value function to enhance the quality of life. Here, it is pertinent to note that moral values may differ according to the situation one is in.

For example, one of the core moral values in society today is honour and respect for oneself and another. However, this same honour may be construed as disrespect and conceit for another to protect one’s own dignity.

The real moral value of honour should therefore be taught as universal respect and honour for another life irrespective of other catalysts.

Ethics on the other hand can be defined as an individual who possesses moral values and expresses willingness to do only the right thing despite the difficulty in performing the morally right act. A person is said to be ethical if he possesses and practices moral values.

Listing out a set of defined moral or ethical values is not a realistic task.

However, religious texts, philosophers, and preachers have laid down the principle of moral and ethical values that ought to be followed by every individual for a harmonious society.

However, ethics and morality have little to do with religion. The values have more to do with living in a civilized society, graciously and amicably.

The Four Pillars of Moral Education

The focus is on building an individual that will be part of a greater community.

The ideals of our forefathers and the teachings of great scholars are contributing factors that have shaped humanity and the nation.

Close on the principles of civic education, cultural education also forms an integral part of moral education. Culture denotes the customs and traditions of a particular nation or ethnic group.

Why Is Moral Education Important in Schools? 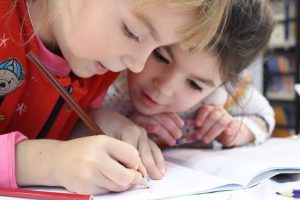 “Education without morals is like a ship without a compass, merely wandering nowhere.” – Martin Luther King

Imparting moral values to a child begins with elders at home. This education however does not end in the formative years and before the child is ready for school.

Imparting value education requires years of understanding and absorption. Every age and stage of the child entails different levels of perception.

Therefore, it becomes imperative that teachers would have to continue this education in schools to ensure continuity of moral education from the elders at home.

Schools are the heart and soul of a child’s life. The formative years of a child are the most important. It is at this time that the child’s character can be moulded and defined.

School teachers and peers are the greatest influence on these impressionable minds. Laying a standard set of values and morals to be taught in school can go a long way in building student character.

Moral education in schools is an effective method of inculcating values in children.

How Schools Can Adopt Better Methods to Impart Moral Education for Students?

Imparting moral values for students is a difficult mission. Keeping students engaged in value-based classes can be a daunting task.

Young minds often wander and get distracted soon. Keeping students engaged and at the same time imparting moral values is the key.

One of the tried and tested methods in many schools is by introducing community activities in the form of designated dates such as lend a helping hand day, share a smile day or even a visit to an orphanage or an old age home.

Practicing activities that involve community assistance can give students first-hand experience. Such activities can inculcate a sense of belonging right from a tender age.

What Is the Right Age to Teach Moral Values in Students?

As there are no defined set of rules or a particular curriculum or syllabus related to moral education, the question of when to initiate this value education comes into picture.

Is there a right age? Is there a time when it becomes too late to initiate value education? To answer these questions, one must necessarily reflect on life as a whole.

Value education begins at a very tender age. The process of growing and evolving involves the inculcation of values.

Learning to share, learning to respect, learning to help others in need are all virtues imbibed in us in our formative years. Some of these values are not even taught. They are learned from experience.

At later stages of life, one may make mistakes, minor or grave errors. Such situations demand a reiteration of values. That is why moral education is essential in schools.

There is no particular age that is considered the right age to impart moral education to students. The earlier one is introduced to moral and value education, the easier it is to mould a character. Moral education is a lifelong learning skill.

In conclusion, it must be noted that imparting value and moral education in schools is as important as a subject in mathematics or science.

A doctorate in these subjects is of no use without a sound moral character. Knowledge will most definitely give the students the power, but good character will earn respect.

The truth of one’s character is judged by a choice of actions. These actions are guided by moral principles learned over the years. The importance of moral education can never be undermined.